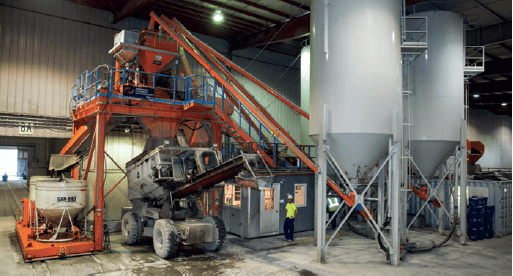 In December 2014, the Newcrete precast division of New Enterprise Stone and Lime Co., Inc., of Roaring Spring, Pennsylvania, USA, was acquired by the MacInnis Group, LLC, and relaunched as PennStress. The precaster is a leading regional supplier of structural prestessed concrete elements for DOT and commercial projects, including highways, parking garages, stadiums, bridges, and modular correctional facilities.

Since its founding in the 1950s, Newcrete relied on concrete from the parent company’s high volume ready-mix operation. Under new ownership, PennStress evaluated new production options, including the choice to continue using ready-mix or invest in its own concrete batching system.

PennStress senior vice president and chief operating officer, Greg Gorman, who held a similar position in the Newcrete organization, developed a strategy to enable the firm to transition to an in-house batch plant. According to Gorman, the firm had experienced challenges over the years producing prestressed concrete structural products using solely ready-mix concrete.

The nature of the high performance concrete (HPC) products manufactured at PennStress demand advanced mix designs. Large PennStress “I” beams, for instance, may be prestressed with steel cable tendons to forces totaling more than three million pounds of pre-tensioning. The beam forms are filled with HPC and allowed to steam-cure for approximately 26 hours before the forms are released and tension strand ends cut. Inconsistencies in concrete compressive strengths can result in differential camber from beam to beam.

“Our mix designs require in excess of 10,000 psi in specialty mixes,” Gorman notes. “It’s very difficult to get consistent high-strength concrete from a high volume ready-mix plant. So consistency in concrete quality was an ongoing concern and cost was another important factor. We sacrificed economy in mix constituents to compensate for the lower mixing energy typical in conventional ready mix.”

Gorman adds, “Ultimately, we needed the right batching tool for our specific requirements. One that would enable us to deliver quality products and provide greater production efficiencies.” Once PennStress began operations, the decision to transition to an in-house batch plant came swiftly. Gorman and his production management team had been researching their options in mixing and batching technology for almost a year by the time the company sale took place. The batch plant acquisition team added an experienced plant operator, Ed Flaugh, to help strengthen the decision process. The team used research from the National Institute of Standards and Technology, industry sources, reference calls, sites visits, and other resources to choose the right mixer – a planetary countercurrent pan mixer. It came down to four vendors. “We did our due diligence, that’s for sure,” Gorman notes. “We saw the vendors at the PCI annual show, met with them individually, called their customers, and we received their proposals and drawings. We narrowed it down to three, then one: Advanced Concrete Technologies.”

“We especially liked the fact that ACT provides a complete, turnkey system that included everything we needed. We felt that the overall integrated
and tested design of the ACT solution set them apart from other options.” 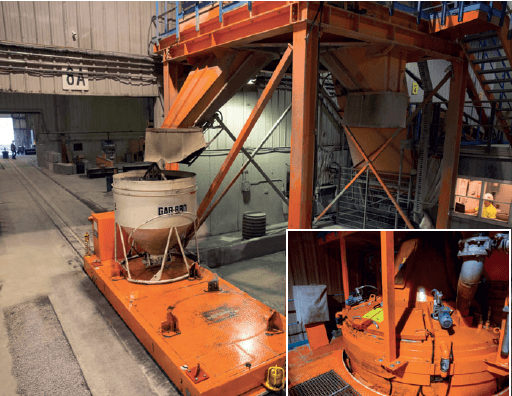 The PennStress selection team also liked the fact that ACT could provide a laboratory scale batch plant that featured a planetary countercurrent mixer, which allowed thecompany to test and perfect mix designs prior to receiving the production system. “We knew that whichever batch system we chose, it was going to take some time to manufacture, ship and install the system,” Gorman explains. “So we included in our specification that we wanted the vendor to provide a temporary small mixer in the meantime so that we could begin testing mix designs.”

ACT had a laboratory-scale mixer available for immediate delivery. Within a few weeks of signing the deal in the spring of 2015, PennStress had the small countercurrent planetary mixer plant from ACT in its shop. “That was a huge time savings for us,” Gorman notes. “The ACT lab mixer helped us adjust our mix designs to match the intensive mixing energy of the countercurrent planetary mixer. We were able to test mix designs and go through the curing and strength testing process so we could hit the ground running when the production plant was ready. We saved at least three months and saved a lot of material that we would have wasted if we had to wait and test after plant installation.”

ACT engineering staff assisted PennStress at every stage to design the plant solution, produce engineering drawings, prepare the installation site, batch plant installation, start-up and operator training. A centrally located area of the PennStress plant offered 21,000 square feet of space between its key production bays. The area was the ideal location for the new batch plant; however, a relatively low roof line made it a tight fit. “It was a real positive to be able to get everything inside, including our aggregate storage and silos,” Gorman says. “Fitting the silos was a game of inches. The tops of the tallest silo is nestled between a couple of beams with about seven inches of clearance! We used a very experienced local erector and ACT was there to supervise everything.”

This site uses Akismet to reduce spam. Learn how your comment data is processed.