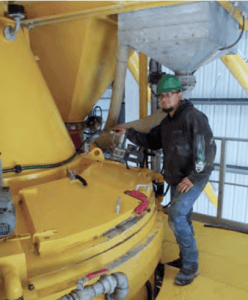 Capital Precast’s new modular concrete batch plant was built in Germany by Wiggert & Co., fully assembled in modules, pre-wired, pre-plumbed, and tested prior to shipment. ACT provides a turnkey plant design that ensures performance, installation speed, and fast time-to-production. Upon delivery to the Capital’s San Marcos facility, installation and start-up was straightforward, with ACT engineers on site to orchestrate the process.

The firm began life using only ready-mix concrete, but soon built a small facility in New Braunfels and added a two-yard ribbon mixer. “We began with just three forms, and one long year after another, we slowly accumulated more capability and capacity,” Ash notes. “As we got bigger, we had to again rely on ready-mix to meet our pro- duction needs. Growing at the right pace is always a challenge. I never wanted to grow too fast, but sometimes you experience growth spurts and you can’t fully control it.” What about the Recession? “Our strategy was to pick up market share during the recession period,” Ash says. “We got a little more aggressive with our marketing. Our competitors seemed to slump off a little on service when times got tough. We did the opposite. We stepped it up a notch. Yes, our pricing did have to be a little more competitive, but our value-added approach was the real difference. It was a challenge juggling the need to provide the right price with our overall service-oriented approach.”

By 2011, the local economy had improved so much that the firm’s management team decided the time was right to go all in and invest in a new facility. In early 2012, the firm purchased 46 acres in San Marcos, about two miles from the New Braunfels plant. The buying didn’t stop there. A few months later, Capital Precast bought out a smaller precaster, Hill Country Concrete in nearby Kyle, TX. The acquisition brought new products and additional experienced personnel to Capital Precast.

The firm needed a larger facility where it could consolidate its operations and continue to grow. Capital Precast broke ground on the new facility in San Marcos in mid- 2012 and, at the same time, it went shopping for a new concrete batch plant. Capital moved into the new facility in 2013; however, since a batch plant had not yet been selected, it used ready-mix in the meantime.

While the firm got by on ready-mix, the usual challenges of relying on ready-mix for precast production became more and more burdensome as product demand continued to increase. “For starters, TX DOT is not really happy with ready-mix–it’s just not precise enough,” Ash observes. “Everything fluctuates and making corrections is approxi- mate. The truck is a barrel drum mixer with little real control. Plus or minus can be pretty large at times.”

Choosing the right modular concrete batch plant took longer than expected. There were many choices and comparing one plant with another was not apples to apples. The Capital Precast team spent about six months pouring over specifications, spreadsheets, and talking to vendors and their customers. The decision came down to three top vendors.

Like most firms, Capital looked at a range of options and costs for its new batch plant. The selection team considered the lowest bidder; however, the difference in cost was not enough to go that route. After all, the batch plant is the core of the business and the goal was to produce high quality SCC. The firm’s previous batching system, a two-yard ribbon mixer, was labor intensive because it required an operator to stand over the mixer all day to ensure reasonable accuracy. The operator had to know what to do if it was raining that day, or particularly cold, or unusually dry.

Ultimately, Capital Precast chose a MobilMat Mo3450-4-PCS batch plant from Advanced Concrete Technologies (ACT). “A big part of our decision to go with ACT was their overall approach,” Ash notes. “They are more of a partner than a vendor. ACT president Max Hoene and his team spent time with us going over design and layout ideas for positioning our new batch plant in the existing structure. Their approach was much like ours–value added. They gave us exactly what we needed and saw it through from start to finish.”

Capital Precast’s new batch plant was built in Germany by Wiggert & Co., fully assembled in modules, pre-wired, pre-plumbed, and tested prior to shipment. Upon delivery to the Capital’s San Marcos facility, ACT engineers were on hand to assist the firm in installation, startup, and training.

“The ACT modular concrete batch plant is fully integrated, not just a bunch of components delivered to our site with an instruction manual,” Ash says. “Except for our admixture dispensing system–which is tied into the ACT plant control systems as well–every other part of the batch plant is provided by ACT. The only thing we provided was the prepared site, electricity, water, and compressed air. If anything else goes wrong, we make one phone call and ACT is there to help us.”

This site uses Akismet to reduce spam. Learn how your comment data is processed.