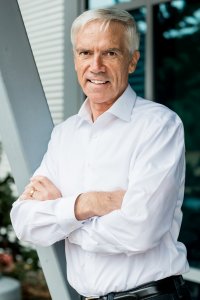 While he may have officially retired as of April 1, E. Max Hoene is not leaving behind the company he co-founded and striding off into the sunset. Advanced Concrete Technologies, the Greenland, NH-based mixing and batching plant solutions supplier that Hoene founded with two German partners in 1989, will carry on without missing a beat. That’s because Hoene, a fixture in the precast concrete industry for more than 30 years, has planned his retirement the way he maps out a new precast plant – with meticulous precision and attention to details.

With the leadership team firmly in place, and a customer-centric culture embedded as firmly as rebar in precast products, ACT will build on the same approach that Hoene nurtured over the years. In fact, every employee at the local company with worldwide reach, can probably hear Hoene’s plant design mantra, which goes something like this: “Less manual labor. Less production cost. Maximum efficiency. More customer profit.” These are the touchstones that guide ACT’s business and its approach to customer solutions.

“It’s really quite simple,” Hoene said. “Early on, I established a culture where we take care of the customers the same way that I would want to be taken care of. And in return, I believed that the customers would then take care of us.”

Starting with the Basics

That formula has worked, and it dates back to Hoene’s pre-ACT days. After interning with a ready-mix producer during college and absorbing everything he could about concrete quality control, mix designs, gradations and submittals, he was ready for bigger challenges.

Hoene then connected with a German equipment manufacturing group seeking to launch an interlocking concrete paver plant in North America. The German manufacturers must have seen something in their young partner, because they brought him to Munich for a year of training before placing him in charge of starting up a plant that would showcase their equipment and bring the interlocking concrete paver concept to North America. The group settled on Austin, Texas for their pilot factory location.

“So, at the young age of 23, I was building a greenfield factory from scratch. It was a fantastic experience,” Hoene said. “I did all the marketing, the banking relationships, the legal, management, HR – everything, down to sweeping the floors. It was like a real-world MBA.”

The interlocking paver business took off almost immediately, with positive cash flow after only six months. “It was an exciting time for us, but also distracted us from our main objective, which was to sell the production equipment,” Hoene said.

After eight years of cranking out interlocking pavers, the paver factory was sold and Hoene, along with German partners Klaus Wiggert and Gerhard Würschum, founded ACT. This new beginning brought Hoene and his young family back to his home state of New Hampshire.

The Texas experience formed the foundation for ACT’s approach to customers, according to Stefan Siegels, ACT president. “Max’s approach has always come from the producer side, because he was a producer himself,” Siegels said. “That’s always been our key advantage in the North American market. It’s never high pressure, like ‘let’s sell that equipment, let’s get rid of that equipment.’ It’s more like, ‘what is the best solution for you?’ Sometimes that means selling less equipment. Sometimes it means a different configuration. We’re not just selling somebody a mixer. We help with the whole concept.”

ACT operates independently in North America as a subsidiary of Wiggert & Co, GmbH, which is an international force in the concrete equipment business with more than 5,000 plants outfitted throughout the world. ACT maintains constant contact with the Wiggert engineering team. ACT and its customers benefit directly from Wiggert’s global technical expertise.

Best Practices from a Global Partner

Four key mentors helped to set the foundation for ACT’s success, Hoene said. His father, an “old school German,” instilled the ethic of hard work. In Texas, he learned from one of the early pioneers of the concrete paver industry, Walter Bergerhof. Then, as he was launching ACT, Wiggert and Würschum offered ongoing support, access to new technology and wise advice when needed. The connection with Wiggert & Co. has been a key to ACT’s success.

With its international exposure, Wiggert helps bring best practices and innovative technology from its experience around the world to the team at ACT. That’s why, when new mix designs such as SCC (self-consolidating concrete) and UHPC (ultra-high-performance concrete) made their entry into North America, ACT was already well-equipped to help its customers implement the newest concrete technologies.

“Eliminating variables and focusing on highest precision throughout the production process, including ACT’s state-of-the-art moisture technology, enables our customers achieve a competitive edge within their market,” Hoene said.

Hoene has paid that mentoring forward in recent years, as he backed away from the day-to-day operations of the company. Charles Watkins, now the sales and engineering manager, has been one of the main recipients of the cultural and technical coaching, having spent the last four years learning the ACT way.

“I came under the wing of Max when I was hired, so naturally a lot of his behaviors rubbed off,” Watkins said. “What that looks like, for example, is taking the initiative when at a customer’s plant to take any necessary measurements myself, even if it requires climbing all over the plant and equipment. Although the producer could take those measurements, I’ll always offer to do it because we know it’s exactly what we need to help the customer. It’s how Max has been successful. He knows what he wants, and he’ll just do it, no wasting time, just efficiency,” Watkins said.

“What else does Max’s efficiency look like?” Watkins continued. “It could be packing several meetings into a few days, leaving home at 3:30 in the morning to catch the first flight out of Boston and then taking the red eye back home, all to maximize the productivity of work travel. Whether that’s a good idea all the time… that’s questionable, but it’s very efficient,” Watkins says with a laugh.

“He really is always trying to do the best job possible,” Watkins added. “Even 30 years in, you will still see him grabbing a vacuum in our trade show booth because somebody missed a spot in an inconspicuous area that nobody is ever going to see. Or it could be doing the touch-up painting on the smallest nick on top of a 20-foot-high piece of equipment. Nobody would see it. But he did and he’s going to make sure that it’s covered up. He’s definitely thorough.”

“Over the years I’ve collaborated with literally hundreds of clients, and even though each plant was unique in its needs and criteria, we engineered a plant layout concept that fit their vision and their budget,” Hoene said. “I always told customers, ‘you only get one chance to put that mixer in the right place in your factory. If you put it in the right place, it pays dividends every day. If you put it in the wrong place, you’re going to have to pay a little bit every day for reduced efficiency.’ And so, that was the main rally cry that I always had in helping customers design and install our mixing and batching plants. And then how do you efficiently distribute the concrete within their factory with minimal touches and minimal labor,” he added. “The end result is less labor, less production cost. Maximum efficiency, More customer profit.” There’s that mantra again.

Hoene is confident that ACT’s momentum will continue long into the future, with strong connections to its international partner and a leadership team firmly in place.

“During the last five years we have executed a transition plan, where the new leadership has seamlessly taken over day-to-day operations. Our customers can rest assured that ACT management and team members remain strong in our commitment to customer service, product quality and industry-leading innovation,” Hoene said. “The most satisfying thing for me is, when I’m at industry events or visiting with customers, I hear good things coming back. The people and the wide range of what we do in the precast and construction industry is truly amazing. In the end, I feel truly blessed. I cannot imagine a better career to have chosen. Now after 32 years of near constant travel, I’m looking forward to spending more time at home with my family.”

Equipped for the Future

ACT President, Siegels, and Service Manager, Reimund Richter, are joined by Charles Watkins, Sales and Engineering Manager, in leading the company and further expanding service and sales capabilities in North America. Hoene will be available in an advisory and technical support role. This includes working with producers who might want to take advantage of ACT’s evaluation services for their existing plants. Hoene’s industry know-how and practical experience will help identify ways to make their operation more efficient and competitive.

“In leading the company, we will take advantage of a team-focused approach,” Siegels said. “It is a joy to work together with dedicated and knowledgeable employees, continuously improving our sales and service capabilities for our customers. As a tightknit company there are no silos, and lots of crossover among everybody. A significant advantage is that we will always have a direct line of communication with our partners at Wiggert, which is a huge benefit for finding the best solution for the customer.”